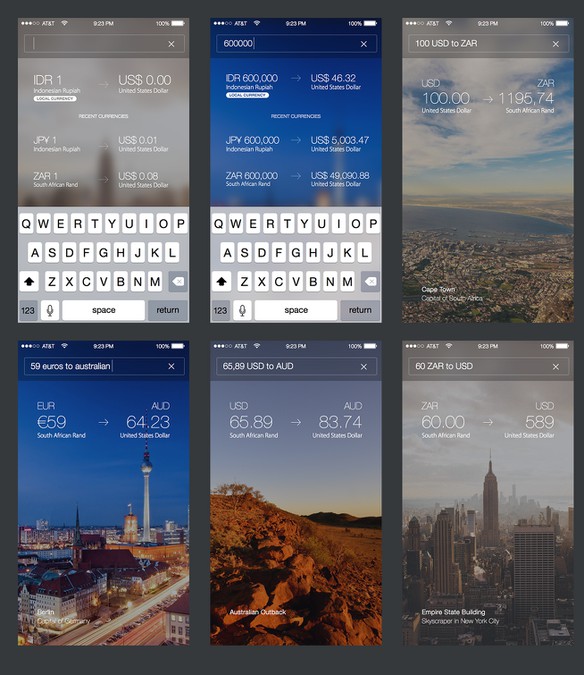 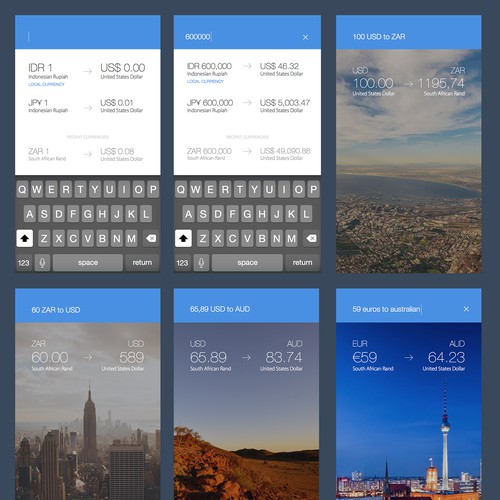 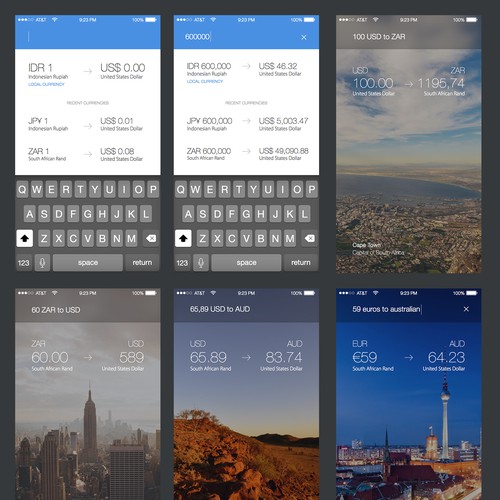 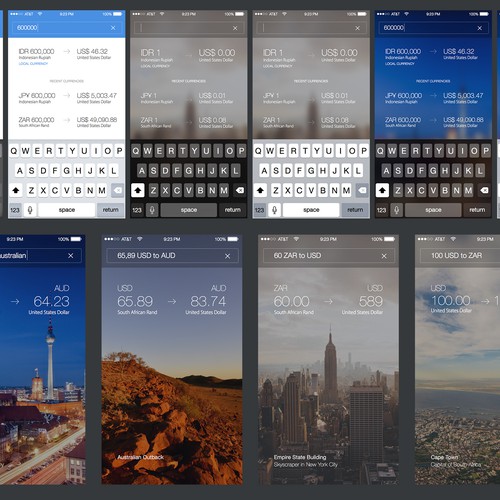 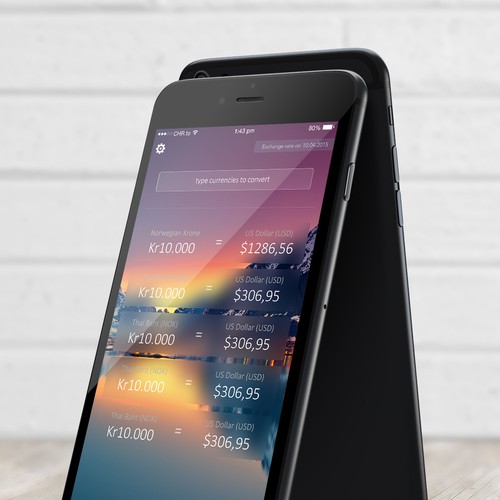 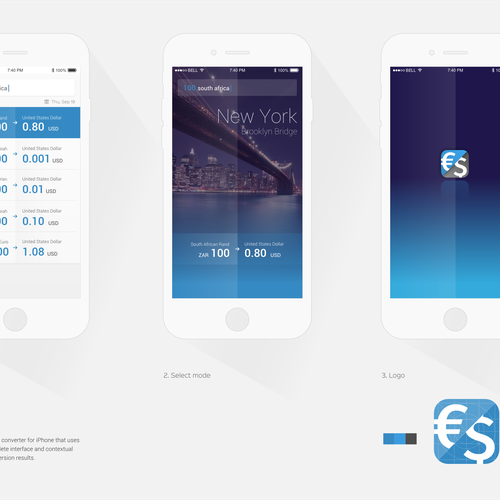 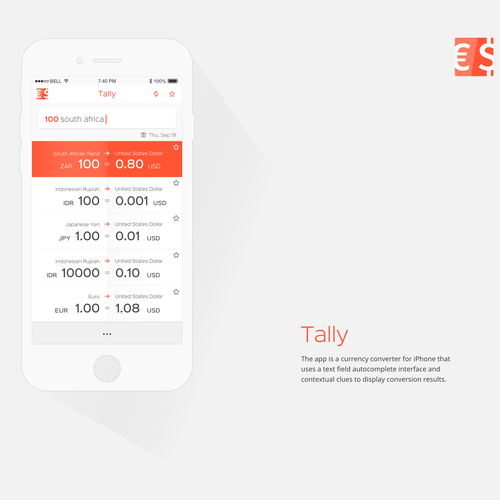 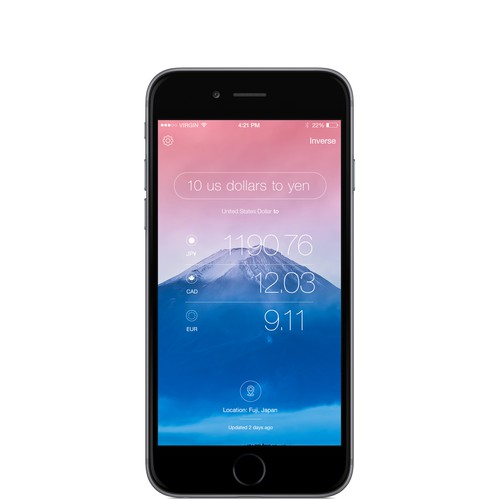 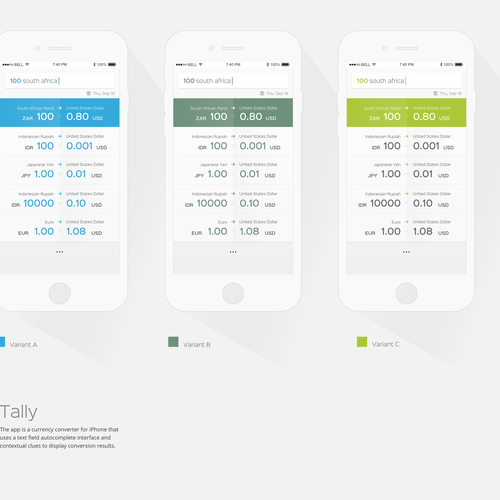 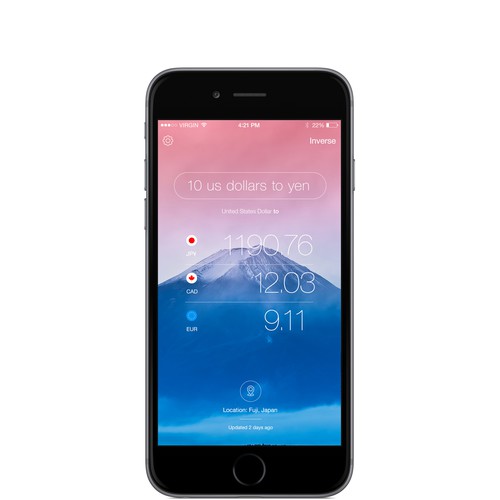 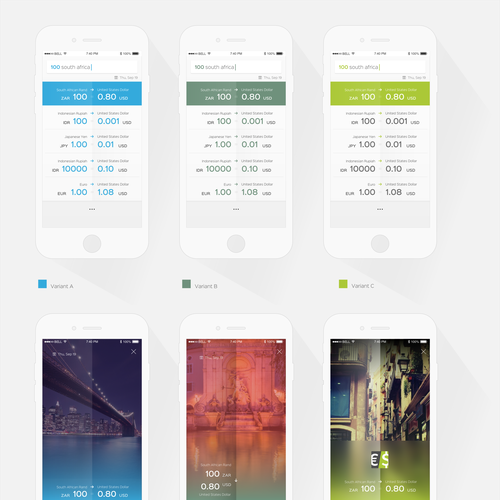 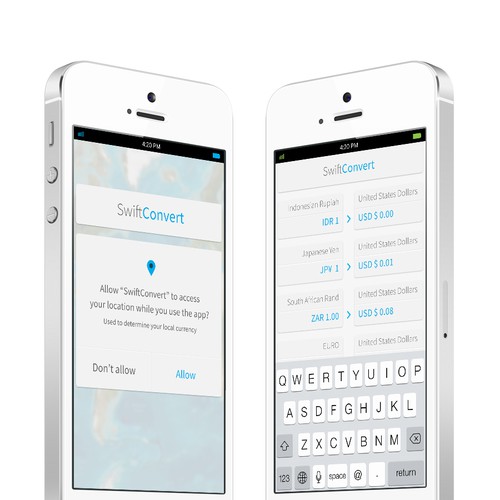 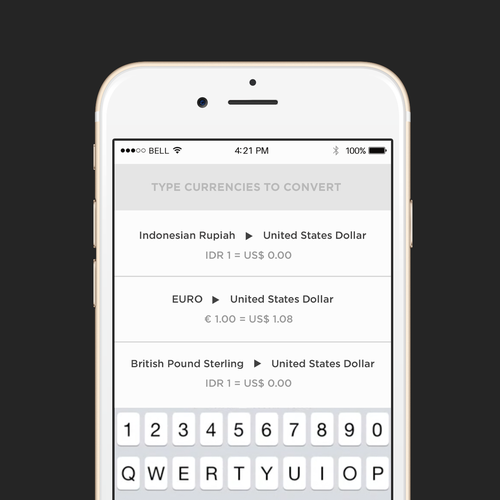 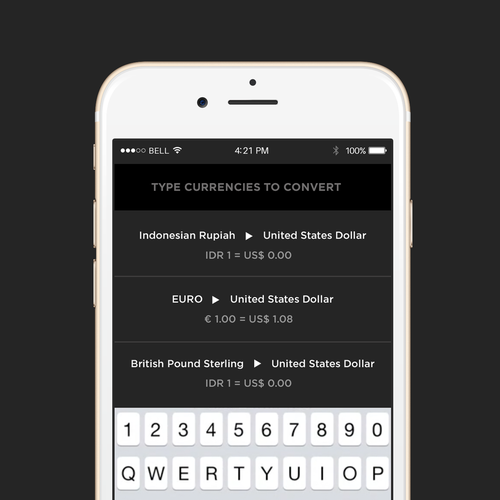 The app is a currency converter for iPhone that uses a text field autocomplete interface and contextual clues to display conversion results.

I'd like the app to be sleek, modern, and minimal, adorned with subtle animations.

Unlike most conversion apps that require users to scroll through long lists of currencies to select the ones they want, this app's interface is similar to Google autocomplete. There is only a single screen, consisting of a text field and a list of results. Users type the currency and quantity they'd like to convert, and the destination currency, all into the text field, and the results update accordingly. Selecting a result displays that conversion, along with other pertinent information (e.g. possibly a map, flags, images of different countries, etc.) The app should also have a mechanism to flip the conversion to its inverse.

The app is extremely predictive and context-aware. By default, all currencies are converted to the user's native currency without even having to type it in. If the user is outside his/her home country, the first suggestion, before typing anything at all, is the local currency to the user's native currency. The app remembers and automatically prioritizes currencies the user has searched for in the past, as well as prioritizing popular currencies over less common ones. Be sure to check out the video demo attached to this proposal.

If it fits, it'd be nice to subtly show the user when the exchange rates were last updated (maybe a warning if they're outdated), and text cues when the app is doing work in the background (e.g. fetching the latest exchange rates, determining the user's local currency, etc.)

Nothing heavy, nothing cluttered. It also probably shouldn't draw too much inspiration from existing conversion apps, since the user interface is so different.

Creative, vibrant and welcoming design for IOS app.
$ 699
This app is tourism in nature and will be a one stop app for a whole country to provide information about the country to
84
entries
38
Designer
Redesign eStores App
1 899 US$
eStores is an app that sells electronics
94
entries
44
designers
Design a video-contest/music-discovery app
$999
Panga is a video-contest platform. Music artists setup contests with $$ rewards to promote their upcoming songs. Users m
87
entries
46
デザイナー数
Mobile Retail App
1.200 $
Mobile app which allows ordering of various retail products for pickup and delivery from various retailers. Starting wit
74
entries
29
Designer
A beautiful and professional UI for a fax-sending app
799 $US
Inspiration: https://99designs.com/mobile-app-design/contests/design-beautiful-professional-ui-fax-sending-app-813448/e
18
entries
15
designer graphistes
c2c e-commerce in Mongolia
999 $US
An e-commerce app with c2c business model, connecting seller and purchasers along with b2c features. It has various feat
43
entries
18
designer graphistes

C'est parti!
I want an APP designed call WHEN I DIE. A vault with all your personal info for your next of kin
€ 929
The APP I need built is like a vault where people can store all their personal information. After the death of the perso
53
entries
21
designers
We want a refreshing design for our smart apartment app!
1 199 $US
It's a smart apartment app. It can control the apartment's lights, thermostat, and front door locks.
144
entries
54
designer graphistes
Gestalte ein prägnantes Re-Design (App) für eine weltweite Sportler App
929 €
Es handelt sich um eine App mit der Sportler bzw. Fußballer ihr Talent sichtbar machen können. Im zweiten Schritt connec
62
entries
16
diseñadores
Looking for 31 attractive icons for our Swiss travel website
EUR 450
MySwissAlps.com offers help to people from all over the world, who consider visiting Switzerland for their holidays.
86
entries
16
diseñadores
Capture the love of outdoor vacations/activities!
CA$ 399
We are mainly outdoor cabin and RV vacation rentals. We also handle the coordination of 3rd party outdoor cabin vacatio
82
entries
22
Designer
Luxury Yacht Brokerage Business Cards
599 USD
We are a new yacht brokerage firm. We will be selling yachts from 500k upwards 5million. We are looking for modern luxur
508
entries
36
designer
En savoir plus sur les designs de app
Voir comment ca marche