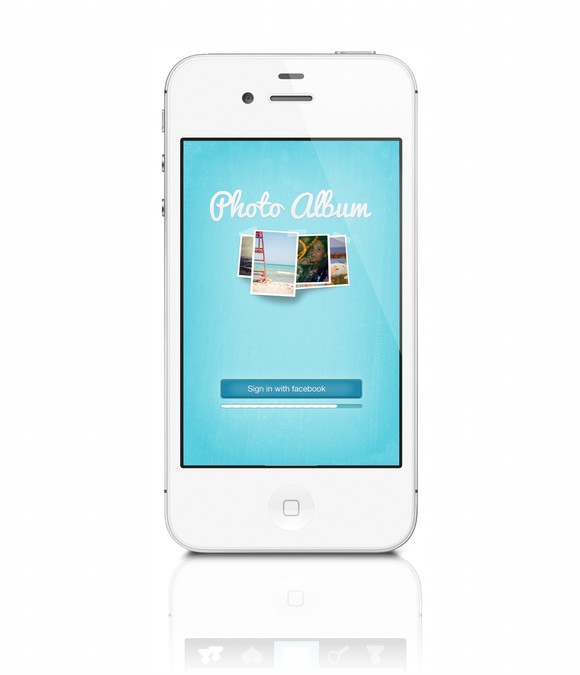 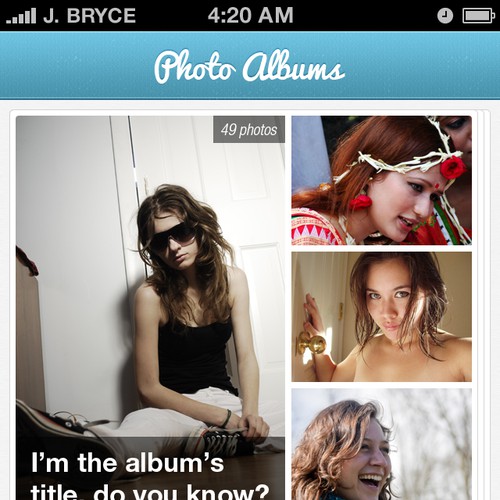 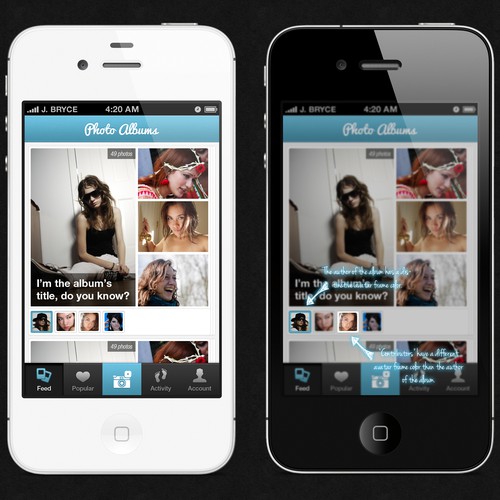 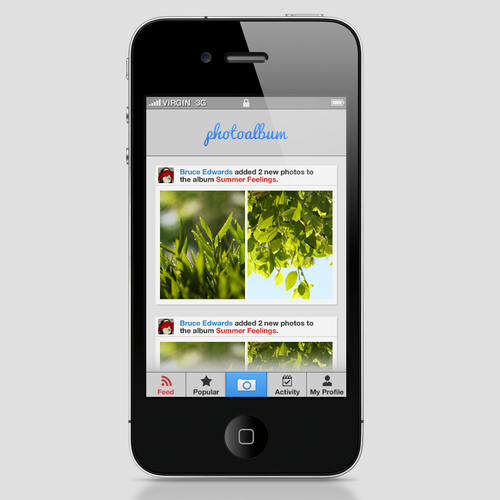 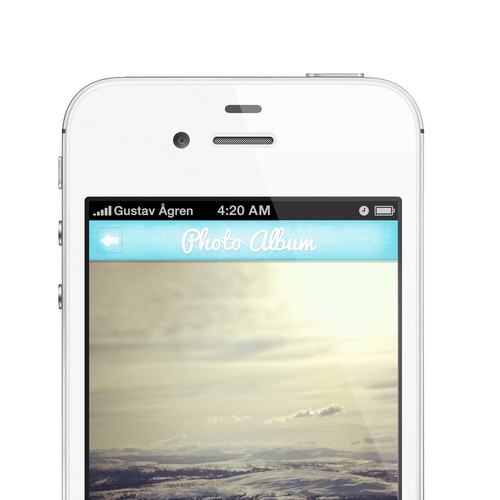 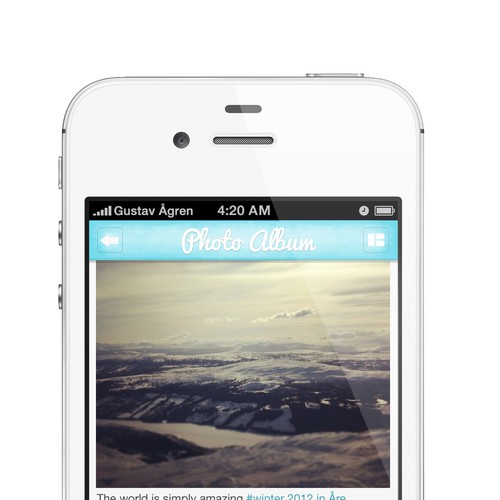 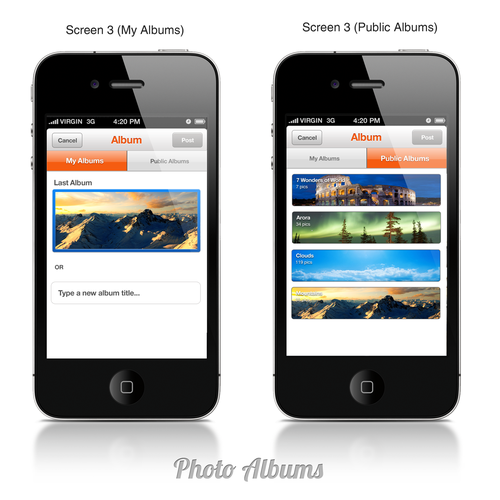 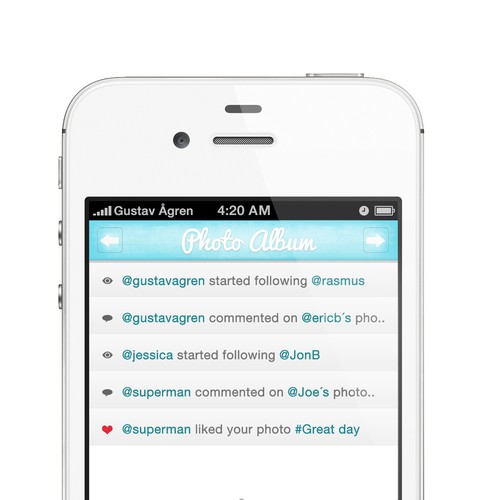 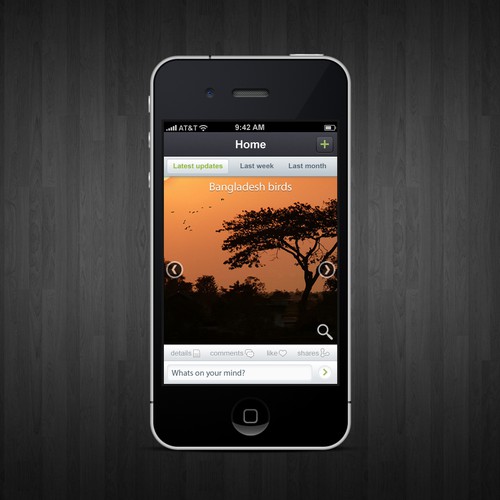 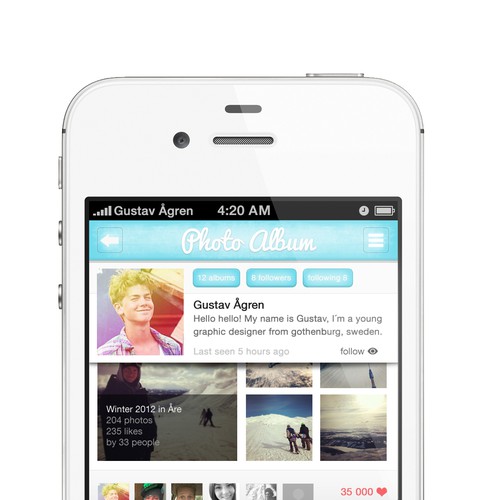 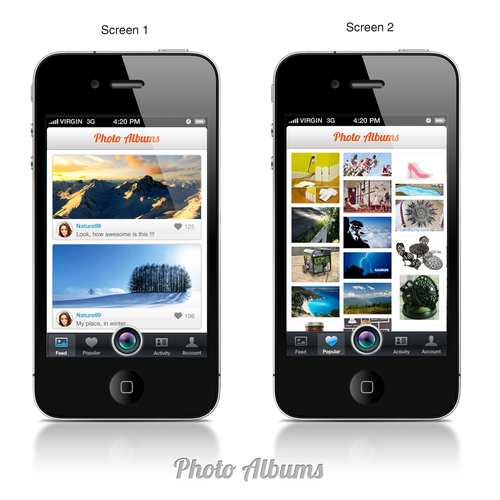 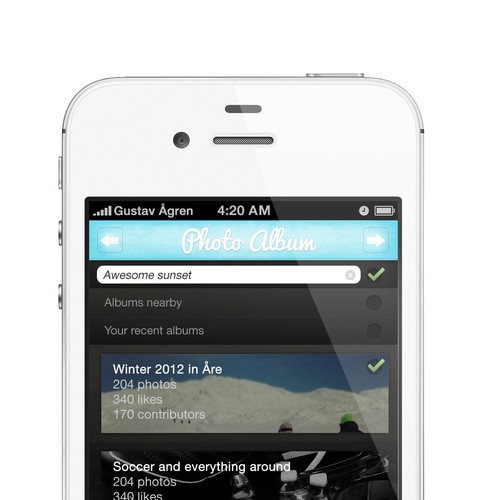 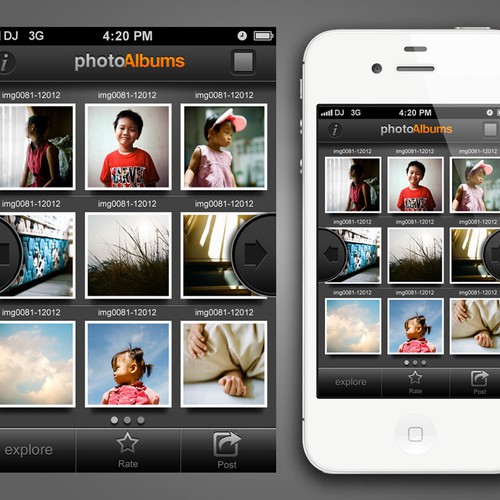 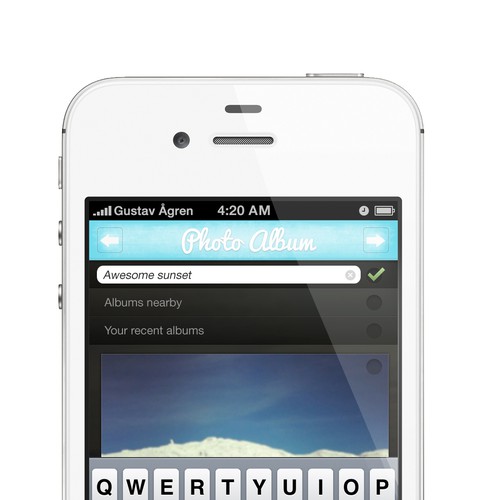 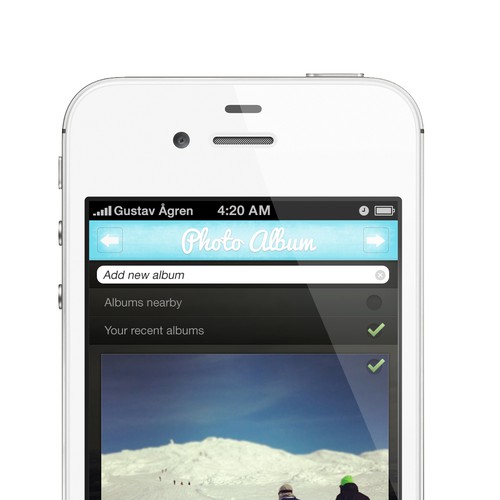 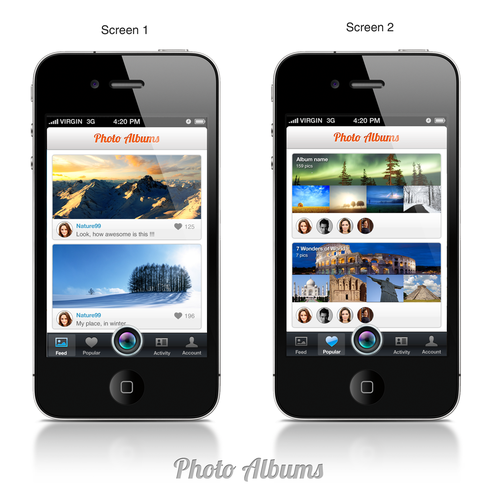 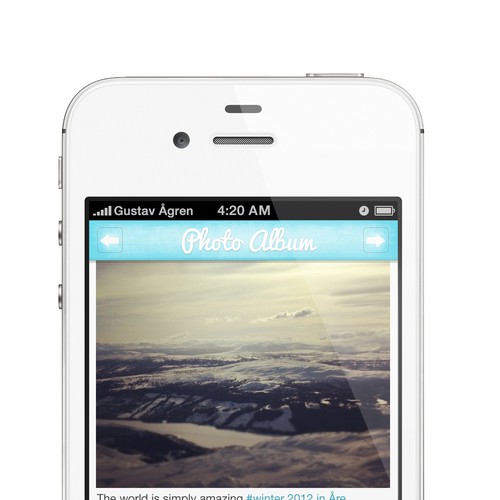 I want to create a mobile app that users can create photo albums and ask friends to add more photo to this albums.
For example if I'm going to a trip with my friends and everybody is photographing than one of us create an album and the rest of us can add photos to it.

The app will have a camera functionality and when a user is taking a picture ,the app will suggest him a number of public albums that he can add this picture according to the time and place the user is in.
The UX must be very simple and friendly with minimum taps to make this actions.
And the UI also must be clean but impressive.
The user can follow other persons he liked.
The app will have an explore page that he can explore popular albums.
I don't know yet if I'l combine the followers albums and the popular albums in one page or in a separate page but please make both options and than I'll decide.

Screen 1 Feed -A feed of the latest albums I'm following

a. Text box for new album or suggested public albums sorted by location

b. My Own Albums and the last album is selected by default

Screen 5 My account - showing it like twitter account with the number I'm following , followers and number of albums. Bellow will be a list of the albums of the user. In the top toolbar put a setting button that will show a simple setting form.

RAW Photography app editor UI designed to appeal to professionals
AU$ 799
Edit RAW, jpeg, Live Photos, and digital videos on your iPad and iPhone for color grading and editing.
39
entries
14
Designer
FitTraction: Transform. Transcend. Together.
US$ 699
Fittraction allows Fitness Personal Trainers to easily communicate and track workout progress, nutritional progress and
62
entries
19
diseñadores
Animated Welcome page design using lottie
$799
My app will be a social networking app similar to Jodel. However we will add MBTI (Personality types) to it. The goal is
20
entries
5
デザイナー数
Emotive logo design for a Video Production/Marketing business
399 $AU
We produce marketing videos for businesses with the overriding theme of the videos being that they use storytelling to m
171
entries
30
designer graphistes
Make the most simple and viral CryptoCurrency App
US$1.099
It's the fastest and easiest way to buy crypto currency in under 5 min. My overall goal is get a redesign of the wirefra
114
entries
57
diseñadores
High end photo products for Moms to archive memories
$ 299
DIY Photobook, greeting cards, calendar creation from our customers pictures. We have an online editor where they creat
69
entries
26
Designer

C'est parti!
Design a nudi, shrimp, or crab. It's like a Rorschach Test gone wild.
$599
Blog and YouTube Channel. https://www.youtube.com/channel/UCJCQIk-eDk0DrEG9KKNsV2w https://underwatermacro.blog/ And my
58
entries
24
diseñadores
Simple Modern Logo Design for Creative Content Business
399 AU$
Content Key is a business to business media company that specialises in creating online media content for businesses to
184
entries
35
Designer
We need to put a complete marketing office in a supersimple and easy-to-use App
€ 1.594
Movylo (www.movylo.com) is an automated "digital marketing office" for local businesses (restaurants, salons, small shop
102
entries
28
Designer
Design for kids money counting app
NOK 5.299
The working title of the app is "Count with money". It an iPad app that lets kids use their local currency for counting
35
entries
21
diseñadores
Photographer Logo Design
USD 299
I am street photographer. I take a mixture of portraits and landscapes and try to include an element humor whenever I c
202
entries
44
designer
Exciting logo needed for video/web company!
$ 429
We are a video and web design company helping mainly small businesses and non profits. I want a fun, modern logo mixed w
66
entries
10
Designer
En savoir plus sur les designs de app
Voir comment ca marche