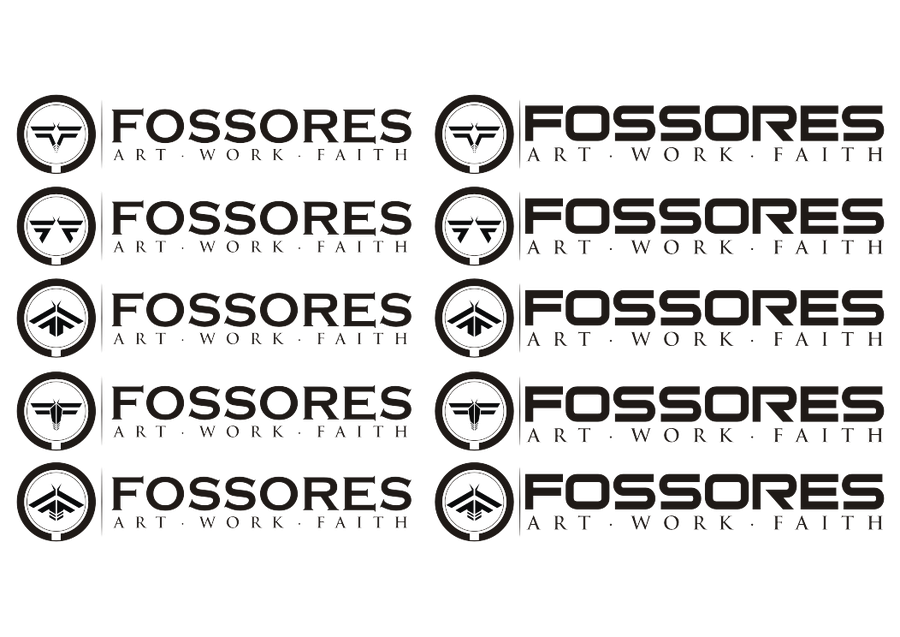 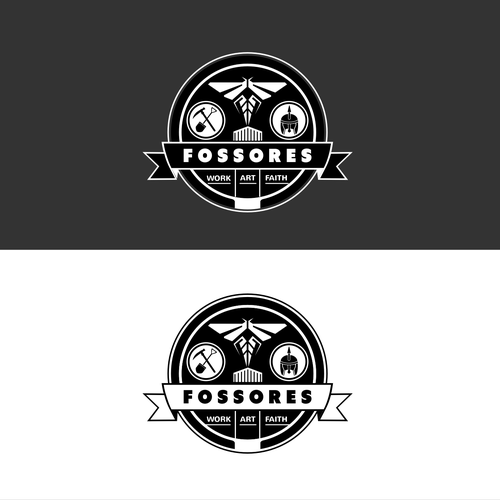 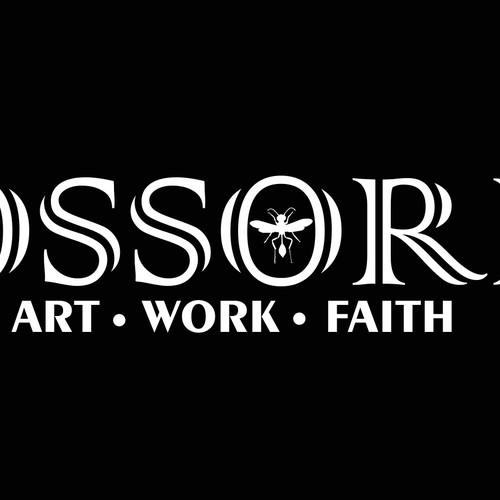 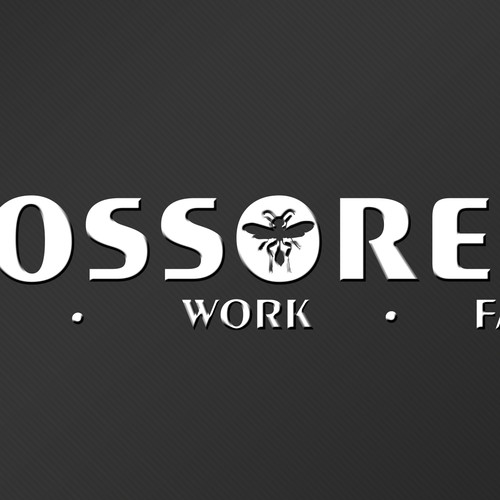 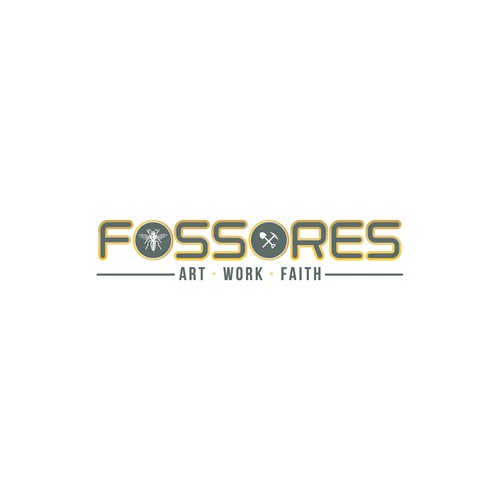 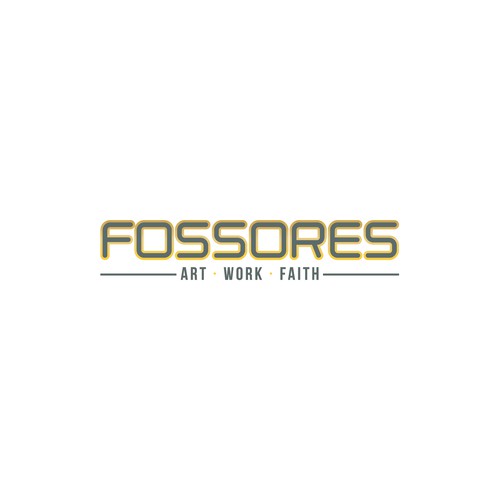 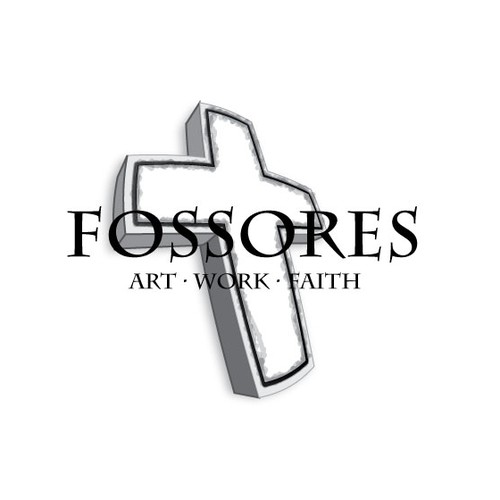 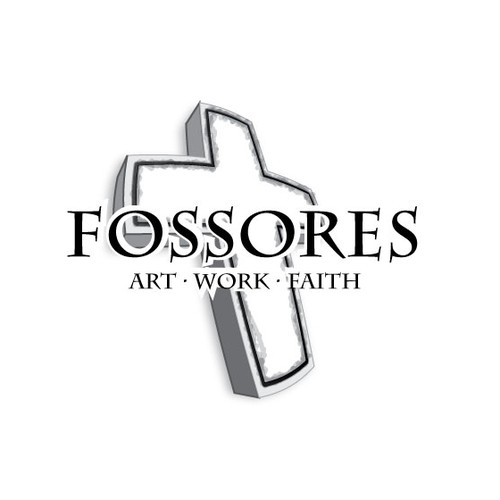 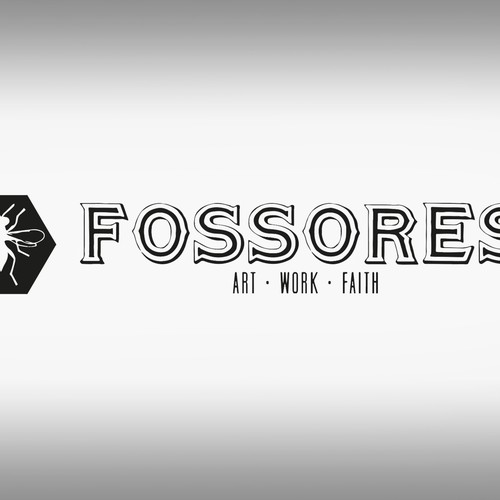 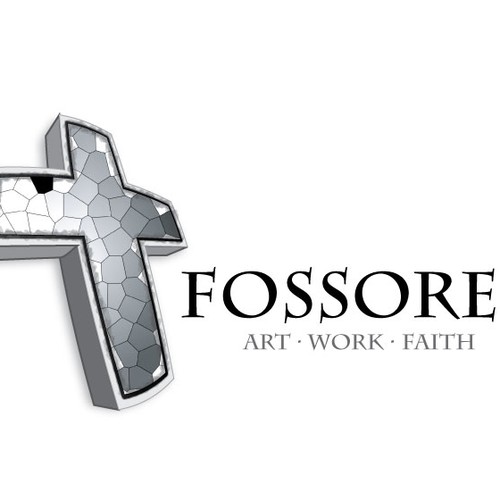 David McDonald is the teaching pastor at Westwinds Community Church in Jackson, MI, a church for misfits and miscreants, rabble and rebels. Westwinds is an orthodox (meaning: not crazy, not cultists) church with an unorthodox (meaning: high energy, non-traditional) approach, working to shadow God, build the church, and heal the world. McDonald designed fossores.com to help people unify the component parts of our cracked lives--family, work, spiritual, etc. The site is a catalog of thoughts, resources, artwork, ideas, etc. for a unified life.

We would love a logo that emphasizes the willingness to sacrifice, resourcefulness, and creativity.

The meaning behind the logo: WHAT IS A FOSSORES?
A “fossores” is a species of sand wasp, and was used in reference to clergymen during the Roman persecution of the church much like we might crudely refer to someone as a cockroach.

Because Christianity was illegal, pastors often took inconspicuous day jobs. Many became gravediggers. By day, fossorians would do backbreaking labor for low pay. But at night, they would use the newly excavated gravesites as houses for worship, smuggling in their brothers and sisters for church in the catacombs.

After the services ended, the fossorians would stay up and pray, decorating the tombs with symbols and scriptures, prayers and pleas. Then they would sleep in the presence of sacralized death, dreaming of God’s plans to heal the world. They practiced the undifferentiated wholeness between their art, their work, and their faith.

CFISQ
CA$ 669
A nationwide project. We aim to train housing and make available to employment 10% of newcomers to Quebec annually in th
199
entries
49
Designer
Engaging Logo for #LeadersOfVolunteers
USD 499
Consulting, speaking, training on volunteer/community engagement, program design, and strategy for NPOs, government, and
74
entries
22
designer
Logo for a university-research project on participation and sustainable mobility
€450
The logo is going to be used for a research group in the field of social sciences, urban planning and computer science,
95
entries
28
デザイナー数
Salute To Service
AU$ 399
We are a charity organisation that helps Australian Veterans/ex-army personel
42
entries
12
designers
Logo for City
299 USD
“This Is Vizag” is a website portal for the costal city “Vizag” (https://en.wikipedia.org/wiki/Visakhapatnam) . - Want
49
entries
14
designer
Create a Great logo for a unchurchy church that helps so many people.
499 $US
We are a very non-religious church that meets in a former warehouse that still has a lot of wood and metal visible. Even
122
entries
20
designer graphistes

C'est parti!
Saint Nicholas Basketball Court Center Logo
US$ 299
This LOGO is for a NEW Gymnasium Basketball Court Center. We would like St Nicks on top and Greek...on the bottom with
18
entries
6
designers
Poor, non profit lawyers working to improve their community need a logo
USD 299
Law office
30
entries
15
designer
Bahamas Charity Needs Powerful Flyer
US$ 299
charitable organization that targets inner city communities that are under privileged
56
entries
20
designers
I want to give people with disabilities more choice
799 AU$
I assist NDIS participants to mange their plan, process claims and make payments to providers
84
entries
10
Designer
Design a cool logo for an outdoorsy homelessness charity
USD 359
I want to sell hats and t-shirts featuring a stylish depiction of St. Bernard of Montjoux (the patron saint of skiing an
58
entries
11
diseñadores
TEDxSantaBarbara's 2020 Theme
$ 499
We are TEDxSantaBarbara and this is the theme for our 2020 event. We will pair this event logo with our TEDxSantaBarbara
143
entries
42
Designer