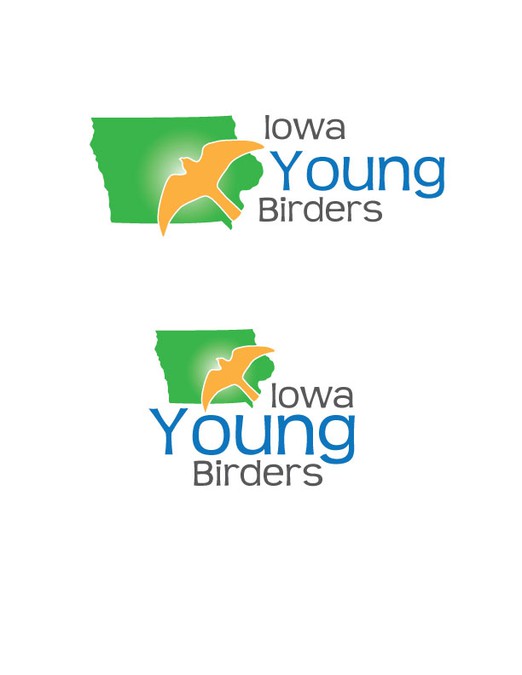 Create the next logo for Iowa Young Birders (a new nonprofit for teens!) 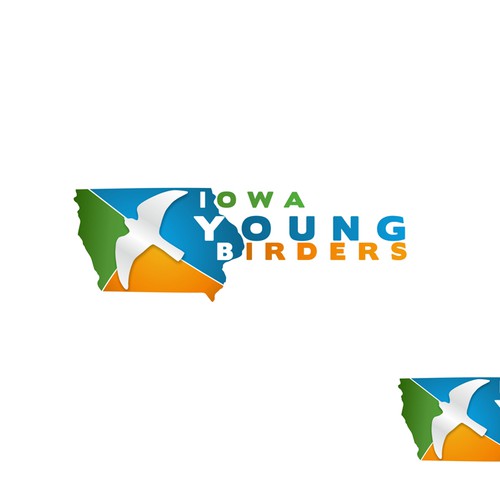 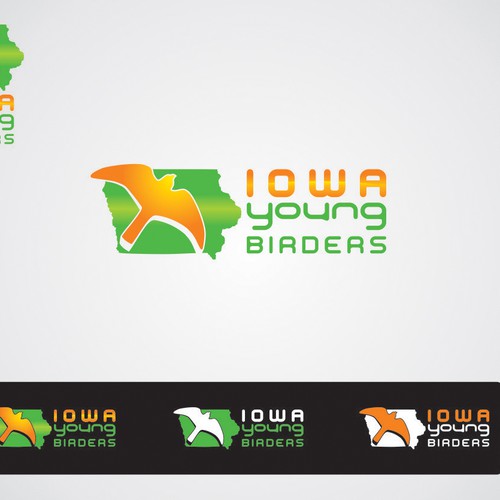 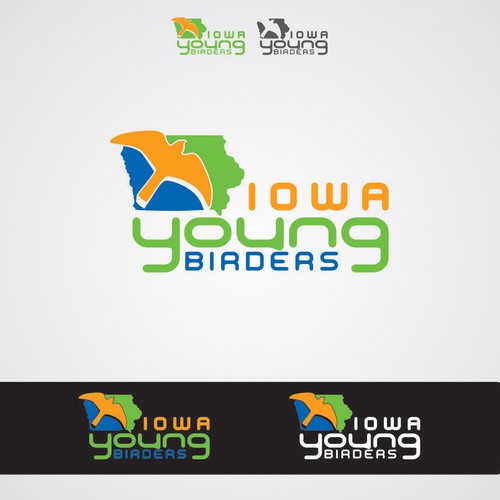 We are a new Iowa-based nonprofit that works to encourage young people (specifically 12-18) to develop and interest in birds and birdwatching. Desired outcome is to give young Iowans interested in birds a fun and encouraging statewide community (field trips, workshops and online community) in the hopes they will also become aware and interested in broader habitat and conservation issues and opportunities to get involved.

There is a similar 90 year old organization in Iowa whose logo is also attached, Iowa Ornithologists' Union. They use the state bird (Goldfinch) superimposed on a map of Iowa.

We would like to use a different bird (outline image attached and labeled Kestrel) and it would be nice to also have an immediately recognized image of Iowa, perhaps also a map but would like not to appear to be copying the existing organization so perhaps the Kestrel soaring over a map of Iowa that has been tilted back, or some alternative treatment that is still recognizable.

The Kestrel needs to remain pretty true to life in shape (the attached is a tracing of a photo so it's original by us and can be used.)

I've also attached a mockup of a Wordpress header image that will contain the logo. If you would like to propose a header treatment as well, that would be great.

We will have a tagline but it's not yet finalized. Would like to be able to use the logo both with and without a tagline depending on the context.

The primary target would be male and female, ages 12-18. This may tend to be teens more interested in science and nature than in football and fashion. Want to demonstrate that birding can be cool and is not JUST for nerds. Also want to communicate the social aspects of birding such as group field trips, sharing of photos and sightings with peers. There is also an element of competitiveness as birders love to find unusual birds and share the news with others. Finally, we are trying to encourage teens to become more interested in broader habitat and conservation issues, using birding as a means to develop that interest.

Having said all this, we also want the organization to appeal to potential funders such as adult donors, foundations, and corporations so it needs to be perceived as demonstrating responsibility and reliability.

The logo will be used on the website, printed materials (business card, letterhead, brochures, etc.) and on hats, t-shirts, etc.

Logo design for Adoption Foundation
299 $
This is a charitable foundation to help families looking to adopt children.
67
entries
21
Designer
Design for a Free Clinic for Injured Dancers and Performing Artists
299 $US
We are a community of committed professionals who work to promote healthy performance, training, education, and lifestyl
82
entries
14
designer graphistes
Create a brand for The Crowd Initiative
499 CHF
The founders of The Crowdinitiative believe that solutions for the world’s big problems should be developed by crowds...
73
entries
21
designer graphistes
Create the FIRST EVER logo for an AUSTIN, TX, area LAKE TOWN!
799 $US
Small town just outside of Austin, TX. In famous Texas Hill Country on Lake Travis. Older generation now being replaced
128
entries
29
designer graphistes
2017 Toy Drive
299 US$
Our 15 year old son partnered with his basketball coach, who already has an organization called "Dibia Dream", to organi
44
entries
3
diseñadores
Launch - A New Program for Teenagers!
US$499
Launch is a residential program for adolescents who have been through rigorous wilderness programs or other, more int...
185
entries
38
diseñadores

C'est parti!
Fresh, fun, and colorful logo for "Purchase with a Purpose" Nonprofit
US$499
For Good is a new, non-profit, online consumer guide to more-than-profit companies. (think encyclopedia of "companies wi
237
entries
47
diseñadores
New watersports festival looking for an outdoor, family oriented logo!
299 $
The Annapolis Watersports Festival is a one-day event that brings together the paddling and sailing communities of Annap
71
entries
11
Designer
Healing and helping --- transformation from disability to ability to helping others
US$299
Association of occupational group known as Peer Specialists, or Peer Recovery Supports, etc. We use generic name Peer Su
136
entries
16
diseñadores
Stello - An engaging news discussion platform
299 US$
Stello is a news discussion forum / social media platform. Consider it as Reddit with some elements of Instagram. On top
92
entries
33
diseñadores
Workspace for high-tech companies is looking for inspiring logo.
299 $US
Vibrant workspace for high-tech companies. The environment that tech. companies would love to be part of.
115
entries
39
designer graphistes
World-changing logo needed for business built on compassion for free!
299 US$
Our organization offers free listening services to people who need to talk, vent, yell or just be heard. It's aimed at p
61
entries
15
diseñadores