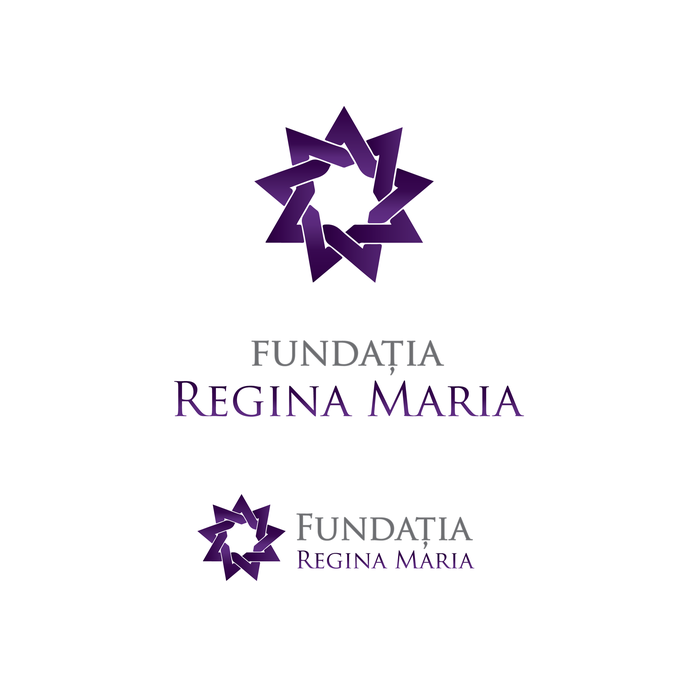 Create the next logo for Fundația REGINA MARIA 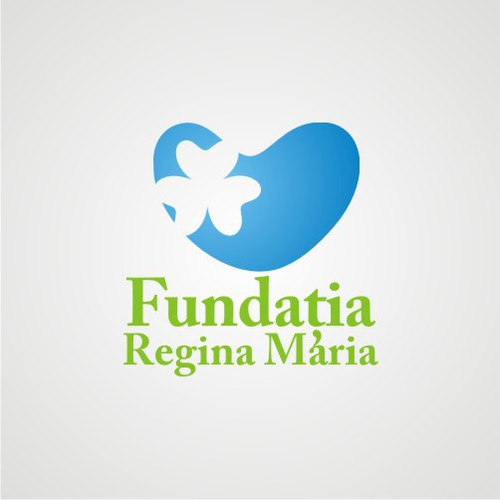 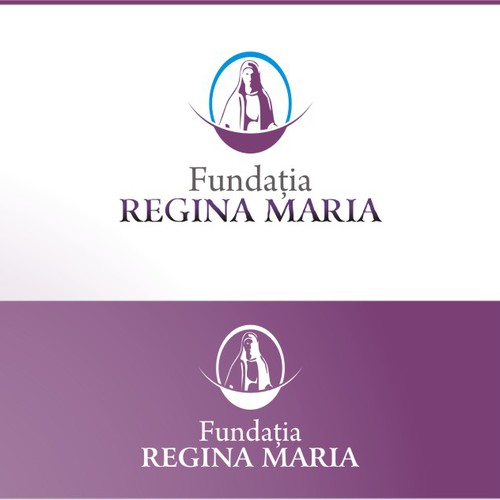 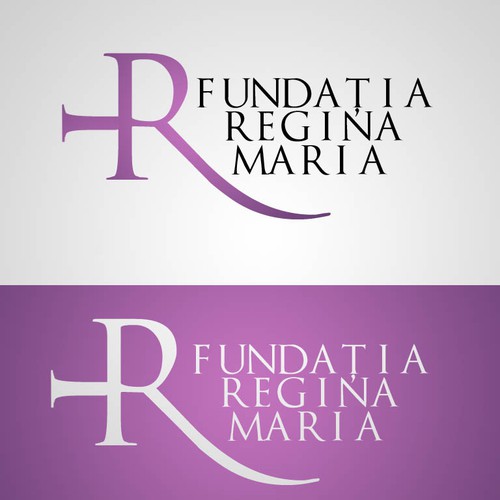 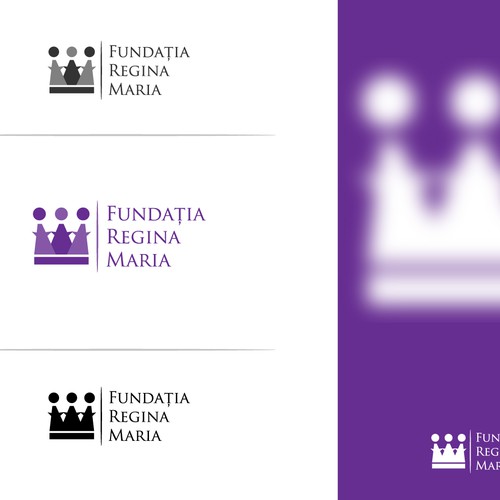 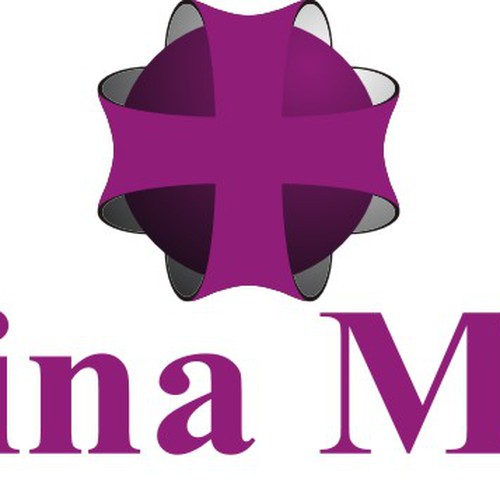 Fundația Regina Maria
[The name of the logo is in Romanian, with the letter “t” having a comma
underneath]

Fundația Regina Maria charitable foundation was established in August 2012,
by Dr. Wargha Enayati and his wife, Mitra Enayati. Fundația Regina Maria’s aim
is to provide medical and educational services for the needy, the former through
the first free clinic in Romania’s capital, Bucharest.

Besides the free clinic, the Foundation is offering two types of support in
the township of Clinceni, on the southwestern border of Bucharest: an
after-school program which currently serves some 50 children, and financial
support for foster mothers/parents in the same township.

Queen Marie of Romania (1875-1938) was the country’s second Queen, from 1914
until her husband’s death in 1927. Granddaughter of two of the most
powerful rulers of the time, Queen Victoria (through her son Albert, Duke of
Edinburth) and Tsar Alexander II (through his daughter Marie), Princess and
later Queen Marie was considered the most beautiful royal in Europe.
The English Princess was betrothed to Prince Ferdinand, who was
chosen to succeed Romania’s first King, Carol I, whose only child died in
infancy. During World War I, Queen Marie rendered dedicated and
sacrificial services to the war wounded, and she coordinated a charity
foundation, earning her the name of “Mother of wounded.” Queen
Marie did amazing work to promote Romania and its people from the time she
arrived in the country at age 17 until her death at age 63. Romania
owes its current geographic size to this remarkable Queen’s lobbying efforts at
the Paris Peace Talks following the conclusion of the great War.

Dr. Wargha and Mrs. Mitra Enayati and Queen Marie share an important
spiritual connection, namely their Bahá’í Faith. It was Queen
Marie’s acceptance of the teachings of Bahá’u’lláh, whom Bahá’ís believe to be
the Promised One of all ages, the great Personage Whose teachings will enable
humanity to build a new world, that prompted Wargha Enayati to move from his
home in Germany to Romania to study medicine in Cluj-Napoca in 1983, at the
height of communism and deprivations. He decided to remain in
Bucharest following the conclusion of his cardiac residency, establishing a
multi-specialty clinic in 1995, Centrul Medical Unirea [Unirea Medical Center],
which developed into the country’s largest private health care network,
rebranded as Regina Maria Rețeaua Privată de
Sănătate [Regina Maria Private Health Care Network] in 2011, following
the sale of Dr. Enayati’s majority share in the company to an investment fund
and the merger with another large health care company. The rebranding, including
the naming of the foundation after Queen Marie, was approved by Romania’s royal
family, specifically King Michael, who is the Queen’s grandson.

Fundația Regina Maria is a Bahá’í-inspired foundation,
meaning that the teachings and values of the Bahá’í Faith are the basis for all
its activities. A quote from Bahá’u’lláh’s writings that guides Dr. and Mrs.
Enayati in their work for the foundation is as follows: “That one
indeed is a man who, today, dedicateth himself to the service of
the entire human race.”

In 1936, two years before her passing, Queen Marie wrote the following:
“More than ever today when the world is facing such a crisis of bewilderment
and unrest must we stand firm in Faith seeking that which binds
together instead of tearing asunder. To thos searching for light,
the Bahá’í teachings offer a star which will lead them to deeper understanding,
to assurance, peace and good will with all men.”

The Bahá'í Faith is the youngest of the world’s independent religions. Its
founder, Bahá’u’lláh (1817-1892), is regarded by Bahá’ís as the most recent in
the line of Messengers of God that stretches back beyond recorded time and that
includes Abraham, Moses, Buddha, Krishna, Zoroaster, Christ and Muhammad.

The central theme of Bahá’u’lláh’s message is that humanity is one single
race and that the day has come for its unification in one global society. God,
Bahá’u’lláh said, has set in motion historical forces that are breaking down
traditional barriers of race, class, creed, and nation and that will, in time,
give birth to a universal civilization. The principal challenge facing the
peoples of the earth is to accept the fact of their oneness and to assist the
processes of unification. [For more information about the Bahá’í
Faith, see http://www.bahai.org

The foundation has two audiences. The first audience includes
those it serves, adults who do not benefit from state health insurance, who have
no job, and whose living conditions are challenging, children who require
educational assistance, those who have been abandoned or are neglected by their
parents, and the many children who can but benefit from moral education and
sound values, something sadly lacking in today’s world. The other
audience includes those who can help to serve the first audience through
Fundația Regina Maria, by offering funding, their time as
volunteers, used clothing, non-perishable food stuffs, and personal hygiene
products.

It would be nice if the
logo could convey both a sense of spirituality and the beauty, elegance, and
dignity of Queen Marie.

Design a logo for a new French Business community in Western Canada
CA$ 399
The organization is building a community of French Executives in the West Canadian Area. We aim to foster connections, e
106
entries
17
Designer
Create a Great logo for a unchurchy church that helps so many people.
$499
We are a very non-religious church that meets in a former warehouse that still has a lot of wood and metal visible. Even
122
entries
20
デザイナー数
Start-up non-profit needs your help!
USD 299
A public charity benefiting people that are both disabled and underprivileged.
50
entries
21
designer
Rkeons creative logo design
299 USD
It is a community based organization, mainly focused on online product selling business. Not non-profit. We basically lo
53
entries
21
designer
California networking organization in need of a logo
$559
Organization that will provide franchisors, franchisees, and suppliers located in California the opportunity to network
44
entries
17
diseñadores
New logo for diversity-focused non-profit
399 CA$
Diversecities is a community service that aims to provide equitable access to an inclusive society for immigrants, youth
151
entries
37
diseñadores

C'est parti!
Poor, non profit lawyers working to improve their community need a logo
US$ 299
Law office
30
entries
15
designers
Pro-Life, Pro-Love Logo to Serve Pregnant Moms in Need
$ 299
This is a pro-life, pro-love organization that serves pregnant moms in need and empowers them to love their children and
19
entries
9
Designer
Building Cyber Security
299 $US
Building Cyber Security is a non-profit industry association with the mission to create a framework and methodology for
49
entries
20
designer graphistes
Sheboygan Works Coworking Club Needs a Logo!
299 $
Sheboygan Works is a talent community and coworking space in Sheboygan, Wisconsin.
102
entries
15
Designer
TEDxSantaBarbara's 2020 Theme
USD 499
We are TEDxSantaBarbara and this is the theme for our 2020 event. We will pair this event logo with our TEDxSantaBarbara
143
entries
42
diseñadores
Design Peaceful Sleeping Newborn Logo for Research Study
299 US$
We are conducting a research study targeting pregnant moms and young snuggling/ sleeping babies. Babies on backs only.
106
entries
36
diseñadores